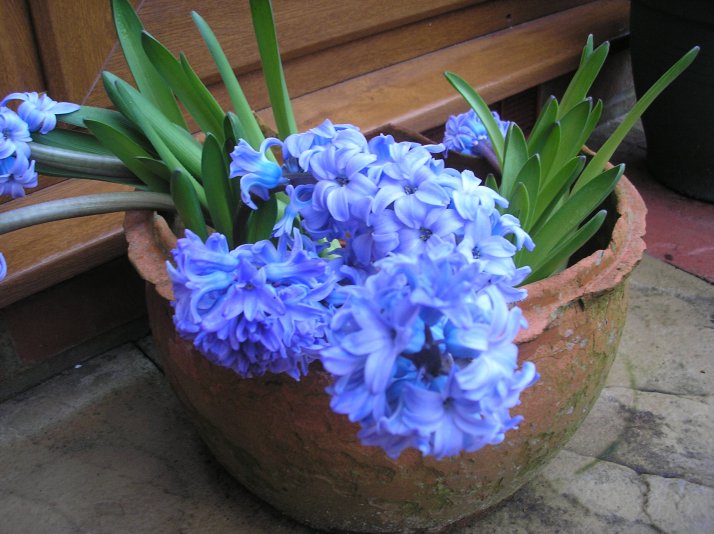 We are continuing with the awful, rainy weather here in England and the cottage garden is getting more than its share of water this Spring. In addition an evil wind has blown in and caused much sorrow to me and my family in the form of a family squabble, which I never expected to be part of. It is partly caused by the generation gap and again I came to realise that my path in life is leading me away from the action and down to the river. I think it must be quite nice to sail away on the tide in a small boat just allowing the current to take you where it will, knowing that you won’t be coming back.

I find myself spending a lot of time day-dreaming these days; remembering back to times gone by – better times in my opinion. My mind takes me back to a time when duty was more important and self-centred thoughts were not allowed.

Perhaps the winds of truth will blow soon from a different direction. 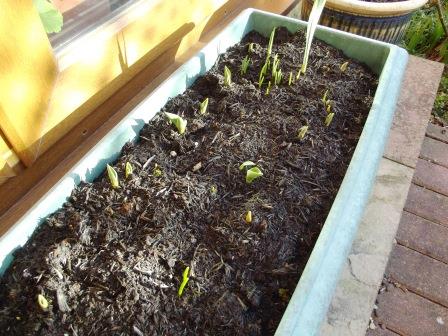 The weather here in England has been appalling just lately with high winds and flooding across much of the country. However here in the south-east, north of London – just! we’re ok, thank goodness.  The cottage garden is not flooded although a bit water logged. Today is lovely and sunny so I went out and took some photos. The bulbs are peeking through in the tubs and the polyanthus are bravely flowering. 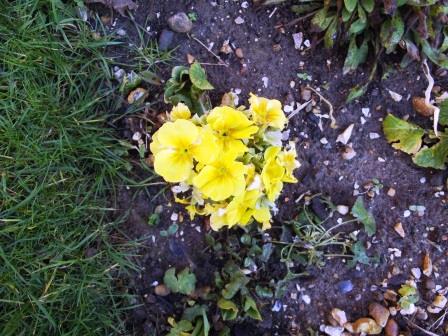 I’ve been in the cottage a lot over the last few weeks and I don’t mind that because I love to read, knit and sew, but today going out was a joy – just for a little while. The first time out gardening always causes stiff muscles – yuck! but a tidy up is in order. Not today though. I’ll wait till it’s a little bit warmer.

Meanwhile I’ll enjoy these gorgeous roses that Larry bought for me for Valentine’s Day. Wasn’t I lucky! 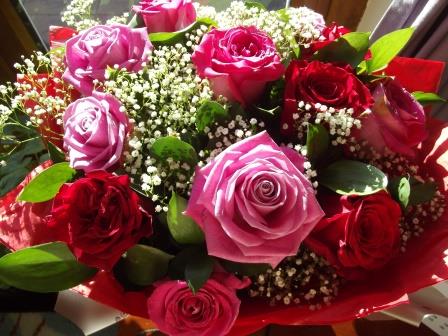 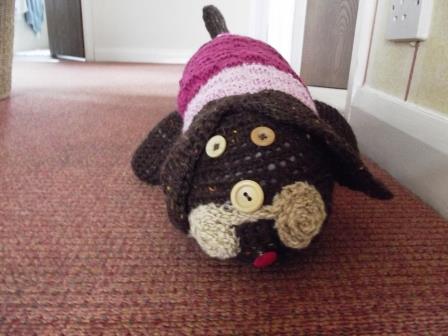 Please meet’ Sausage’. He is the latest member of our family to join the cottage. He is the result of my latest crafty effort and he is a sausage dog (in case you didn’t guess). 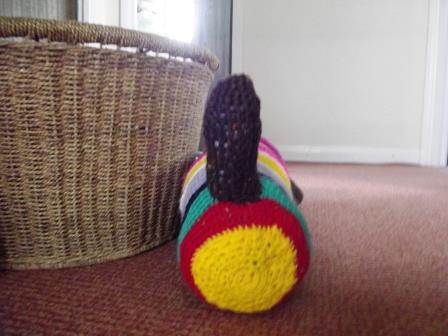 He likes to hide behind the washing basket… 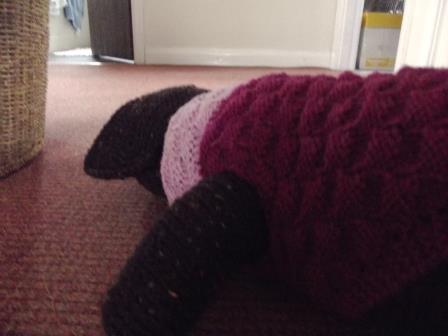 and sneak up on the cat …

He has a very stripey body … 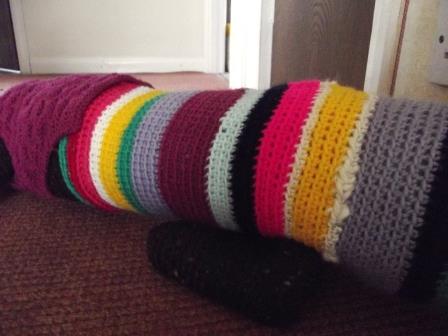 But we all love him 🙂 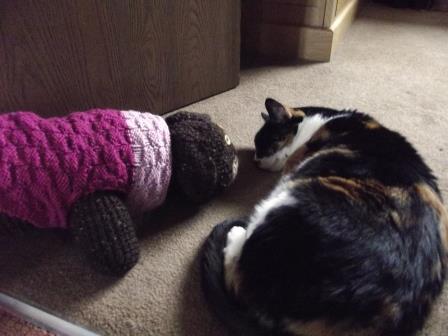 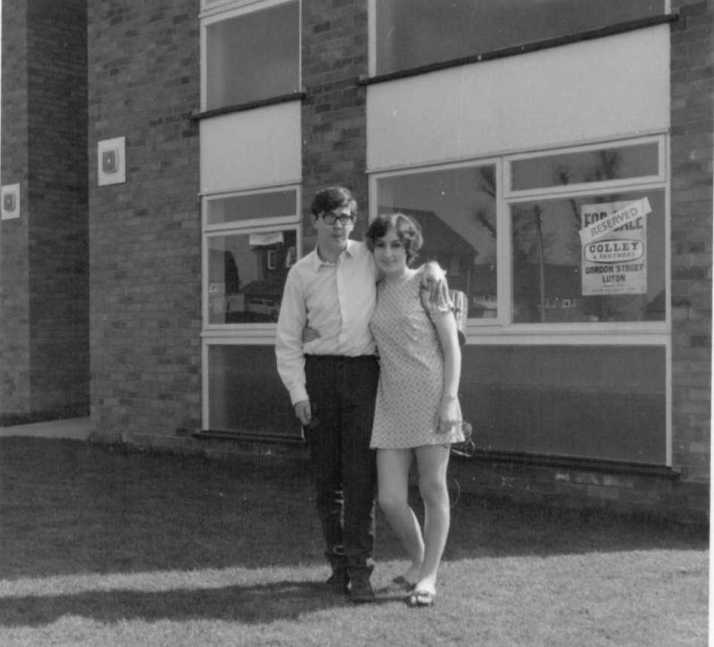 While I was lying in bed feeling awful, I got to thinking about my next post on here. What should I write about? It seemed some time since I wrote a post for my memoirs, mainly because I’ve been caught up in Larry’s posts about his finding on life over here in the U.K. I

I am writing these memoirs for my boys. Perhaps they will like reading them one day. This one is particularly significant and I hardly known where to start. It is about young love and discovery. It also touches on ‘becoming invisible as we get older’ because I am 62 year’s old now; but I wasn’t always old. I wasn’t always an Oma. I was a young lady – that’s me in the picture with my first husband J. We weren’t married yet. When you look at this picture, see me as the young lady I was, not the old lady I’ve become. I’m still here. I just look different and I think differently about life, based on my experiences. I digress…

It is May 1970. I am 18 years old and J is 21. We  are preparing for our wedding in August. We have know each other for four years already and we are planning to get married to the day that we met, i.e. August 15th. For me it is a happy day, a very special day. J and I met on August 15th, 1966 and we married four years later. The marriage was to last for 36 years and we are still great friends to this day.

We saved to get a deposit for the flat (apartment) you see in the picture. It cost apx  £3,200 and our deposit was £1,000. Neither of us earned very much money because we were so young and J was still studying for his degree as a research chemist. He wouldn’t complete the course until three years later, although he already had an H.N.C (Higher National Certificate) in Chemistry. So in those early days I was earning more than he was,just!, as a Sales Administrator at Electrolux. In those days it was only the husband’s salary which counted for the mortgage and then only 2 1/2 times, nothing like it is nowadays. We were lucky to get a mortgage at all. Despite saving diligently in the Halifax Building Society for 3 years, we were still turned down. They said they didn’t lend money on flats and we couldn’t afford a house. Then J’s father took matters into his own hands. He went down to the Building Society and ‘threatened’ to take his own savings out and put them somewhere else if they didn’t give his son a mortgage! Nowadays that probably wouldn’t cut any ice, but then it did. He had significant savings and they listened. Our mortgage was granted (thanks dad) and we got on the first rung of the ladder.

The flat was new, brand new and I can’t tell you how excited I was to get it. My mum promised to buy us some curtains so that they were all the same. They were bright orange and one of the walls was purple. All very 70’s and high fashion at the time. Later on one of my hamsters would chew a big hole in one of those expensive curtains, but I’ll keep that story for another time.

Our flat was on the ground floor, at the front of the building. There was a bus-stop right outside, which was very convenient. I could walk to work and J could get the bus. Bit by bit we bought carpet and furniture and made a cosy home.

In the picture I am wearing a mini-skirt dress. It was made of crimplene, a very fashionable material at the time. I think it was a pale green colour.

Here are some interesting facts about May 1970 in the U.K.

So, we had chosen our home, booked the church for our wedding and the venue for the wedding reception. My dress was chosen as were the dresses for the two bridesmaids. We were almost there…