Larry and I have just had a few wonderful days away in Ely, Cambridgeshire – enjoying the Spring weather and visiting the gorgeous cathedral there.

‘The Cathedral Church of the Holy and Undivided Trinity of Ely is the principal church of the diocese of Ely and is the seat of the Anglican Bishop of Ely.  Highly visible from every direction across the surrounding flat fenland, it has been called ‘Ship of the Fens’ for centuries, although there was a time in the 17th Century during the English Civil War that it was also dubbed ‘Cromwell’s Castle’.

Construction of the Cathedral began in 1081 when the monks of Ely finally submitted to the Norman Conquest after five years of resistance led by Hereward the Wake.  Though dedicated to God, it was a symbol of Norman authority and remains today a remarkable example of Norman architecture, from the original Romanesque features to early English pointed windows and emerging Gothic style.’ 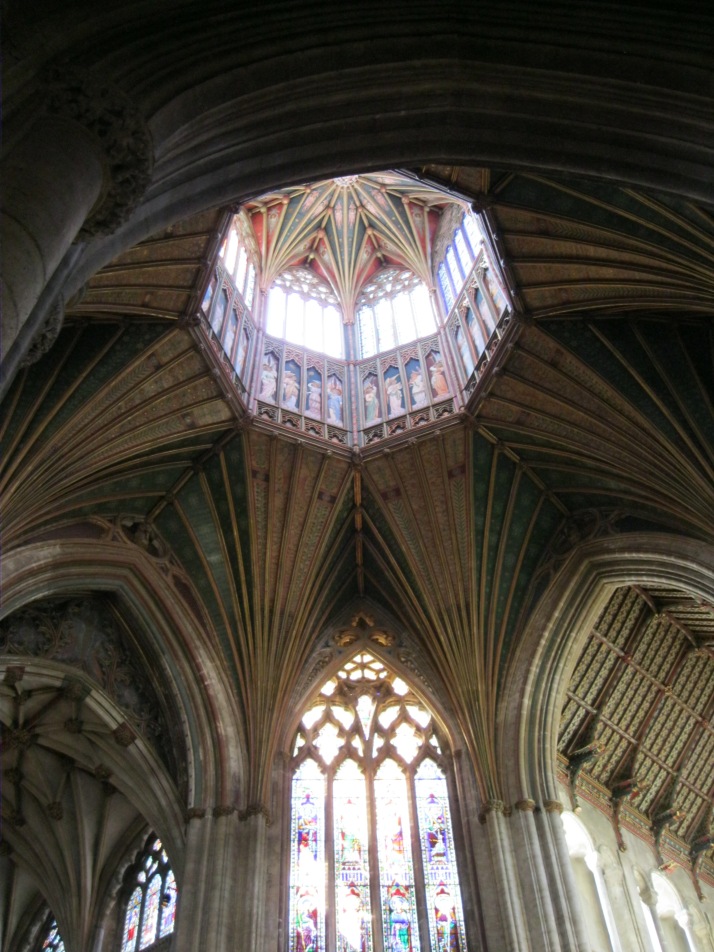 ‘The Church achieved Cathedral status at the beginning of the 12th Century and there have been additions, changes and restorations throughout the centuries since then, in the 13th Century, the Galilee porch of limestone and Purbeck marble was added to the west front entrance and the Cathedral’s east end was extended using the same type of materials.’ 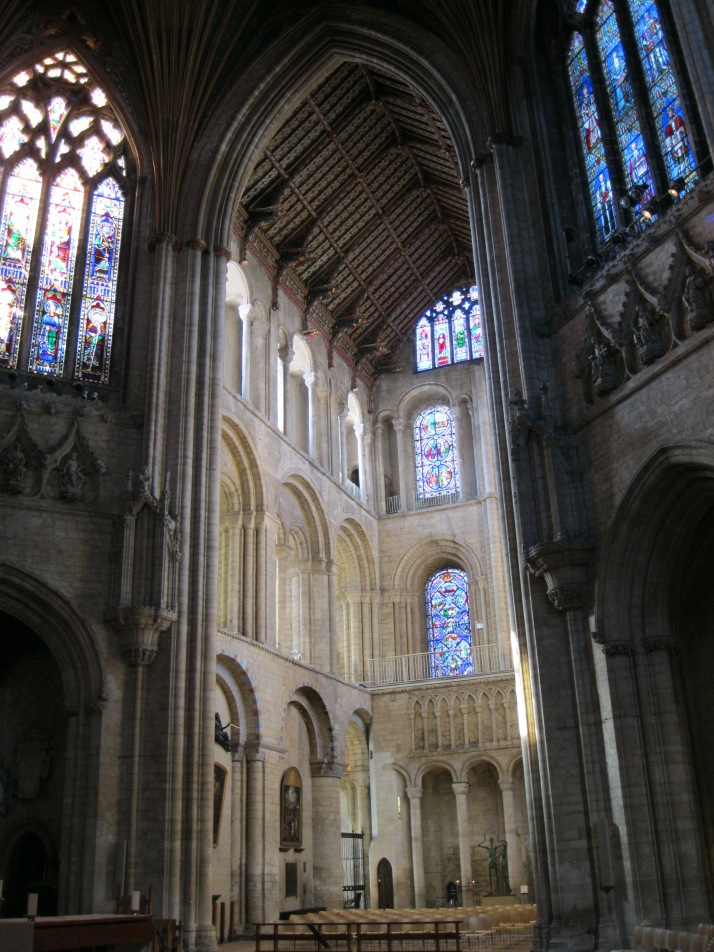 Ely has always been a special place to me because when I was 27 years old, I came to live here for two years. It was a very happy time in my life and felt like being on holiday. At the time I was living in Ely, we had two little boys already – one of four and the other of 7 months and apart from my immediate family, I knew no-one else. I used to visit the Cathedral regularly; in the summertime to keep cool and in the winter-time to get warmed up because the weather in Ely can be very extreme.

The surrounding countryside is very flat, which gives rise to some vicious winds not least of which is the Fen Blow, which whips up the black alluvial soil into dark clouds which scud across the landscape looking like a witch’s cape.

‘Disaster struck n the 14th Century when the original central Norman tower collapsed.  It was replaced with the Octagon that we see today, see picture no. 2 above, a structure unique in European cathedral architecture.  Made of stone, it is topped with a wooden lantern rising from its centre.’ 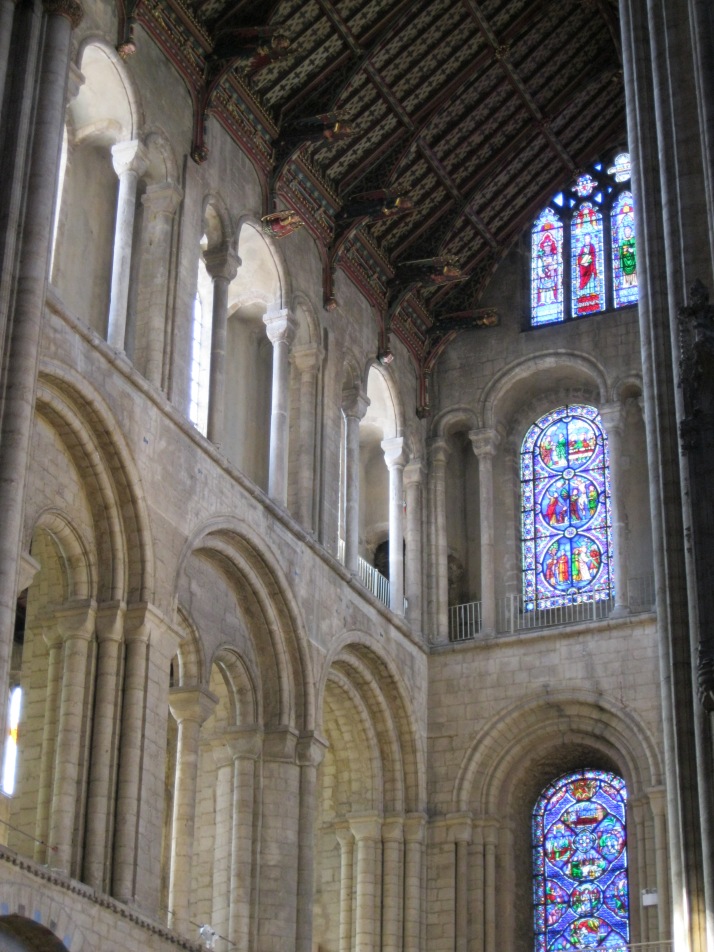 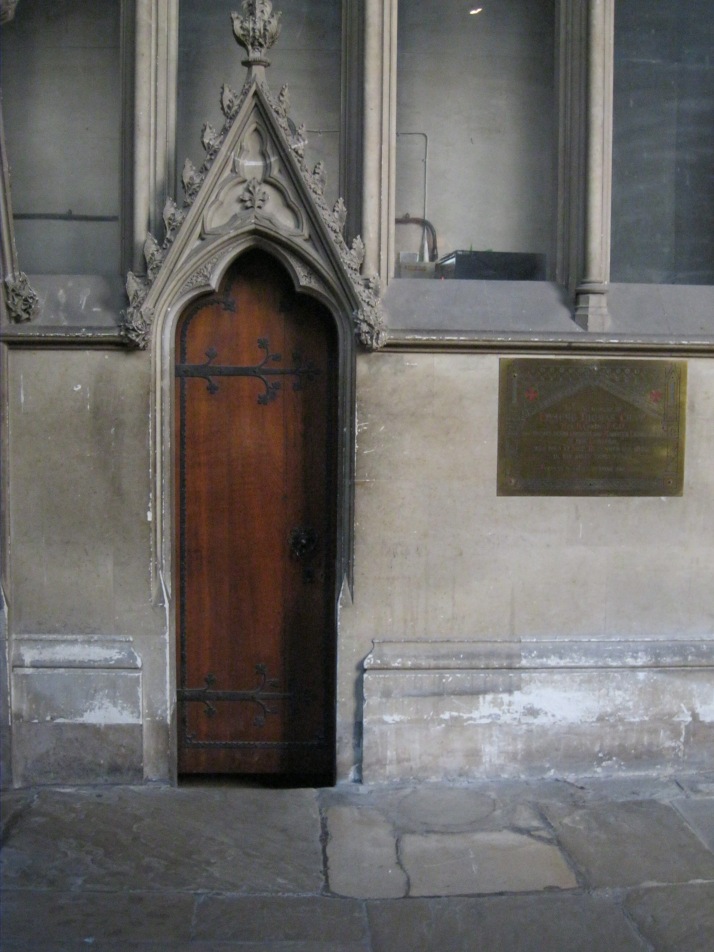 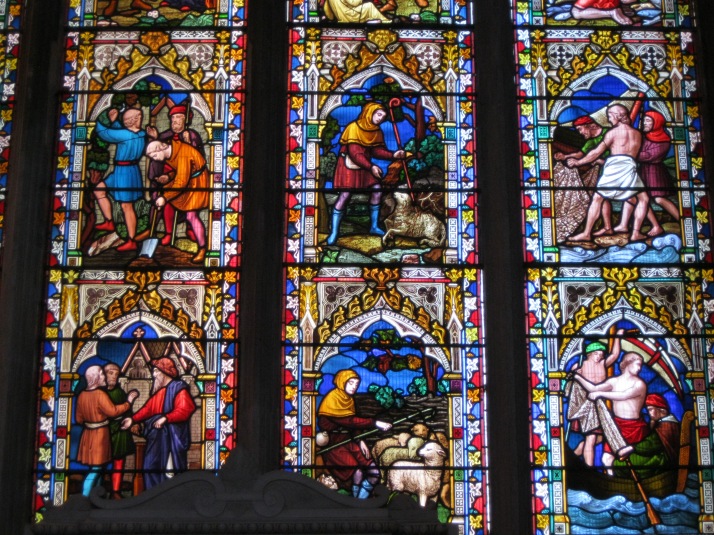 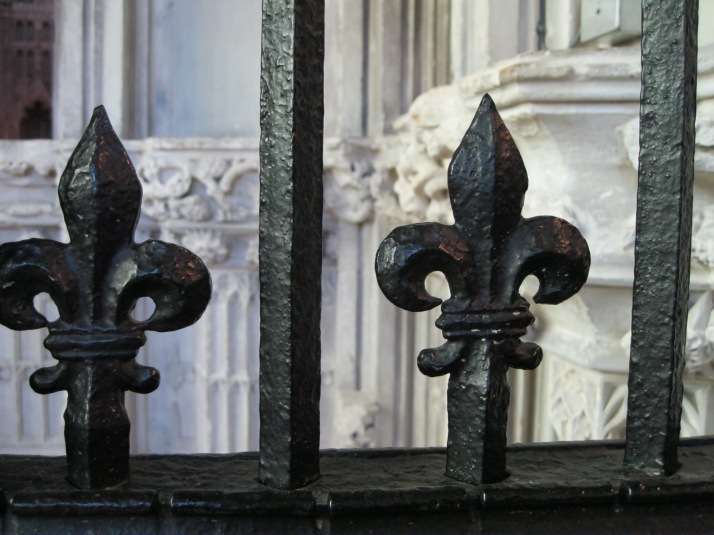 The next picture shows a view of Ely from the south aspect, from the park leading down to the river. It’s very picturesque in all its stately splendour isn’t it?

Now that the weather is getting better, Larry and I are looking forward to spending some more days away and of course I will come back on here and share them with you. 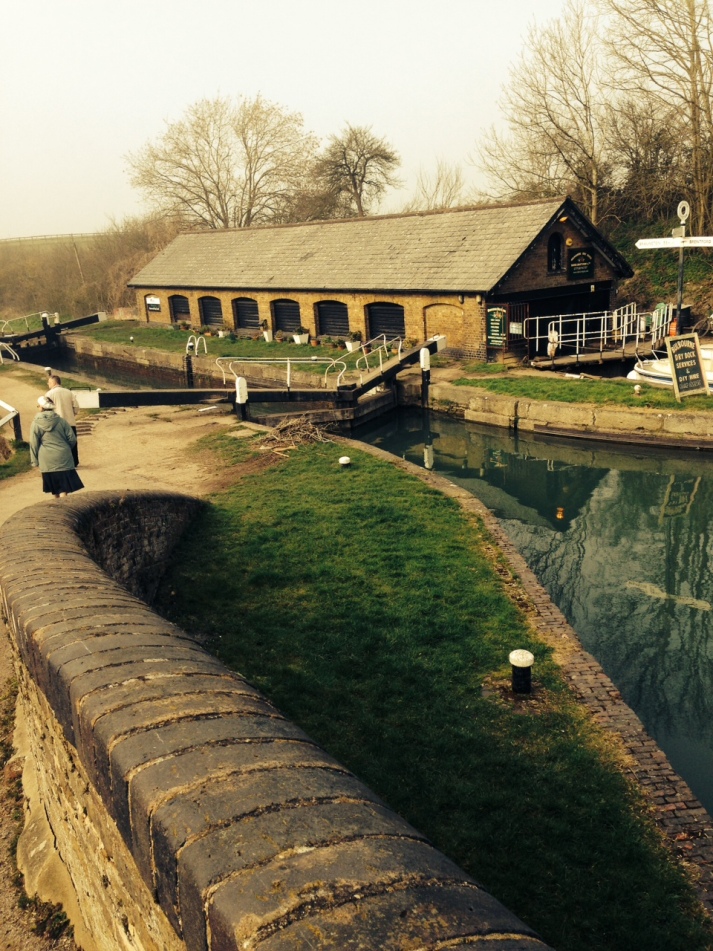 A walk along the canal side is always going to bring joy. Last Thursday, the weather turned bright and cheerful, so we set off to walk beside the water to enliven our spirit and enjoy the softness of feeling that being beside water always brings. Come with me as I walk and listen to the sounds of Spring.

The is the Grand Union Canal. 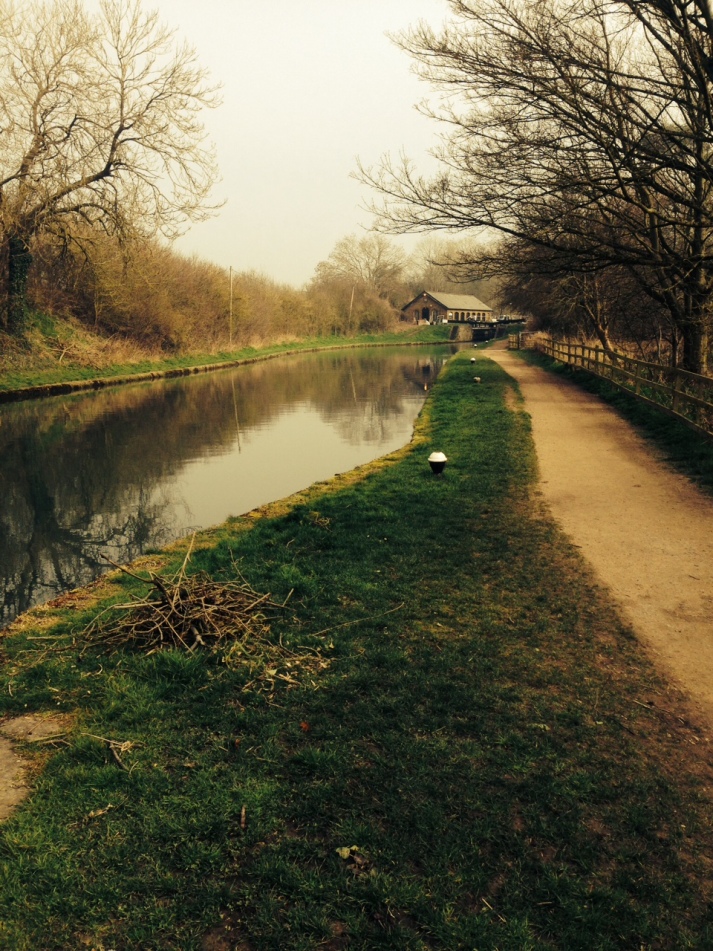 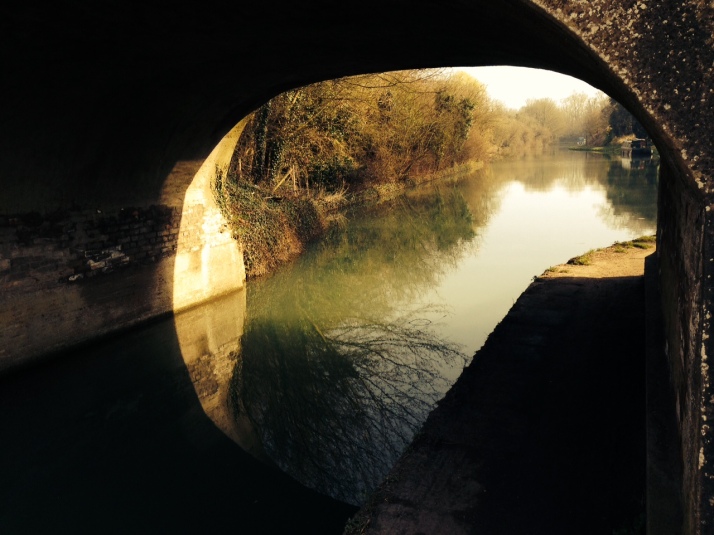 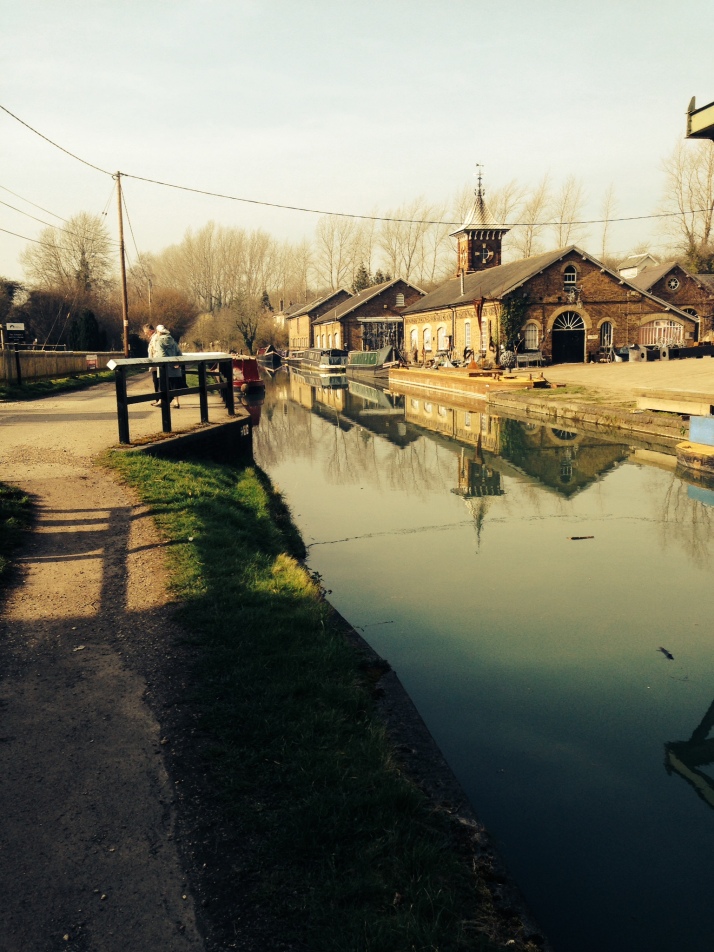 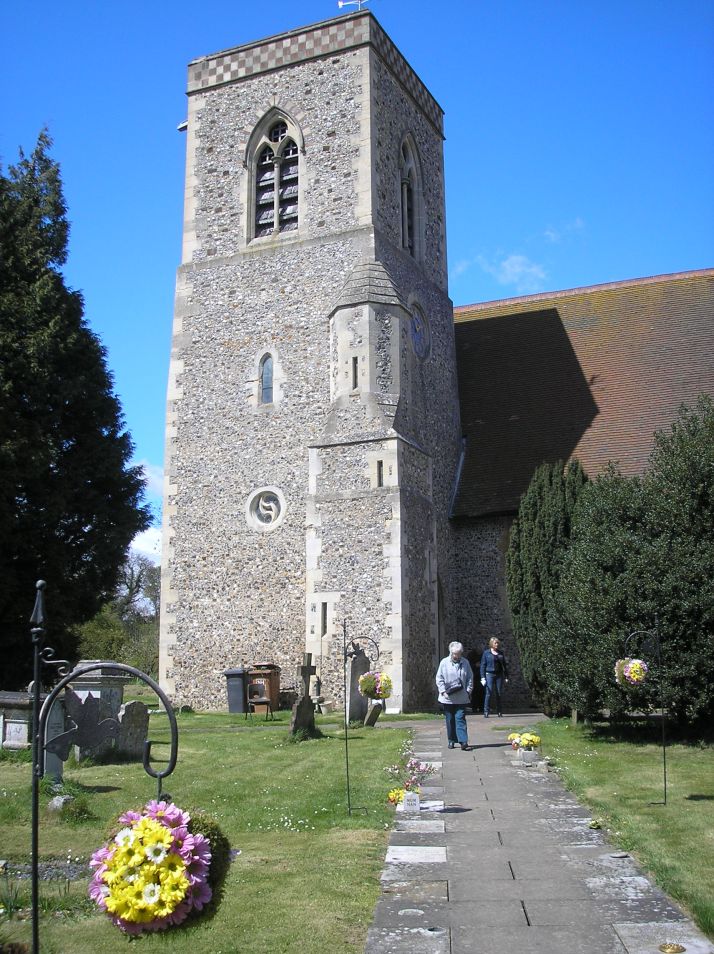 This is St. Peter’s Church, Lilley last Saturday when I visited their glorious Flower Festival. You can read more about Lilley and its church here.

The graveyard is delightful, as is the church and I love to visit every year if I can. It is not my local church.

This year’s Flower Festival theme was ‘  On the Air’   and the festival ran for three days over the recent Bank Holiday weekend.  For once the weather was kind, which made the whole thing more enjoyable and hopefully helped to raise the funds needed to keep this beautiful church in a healthy condition.

Here are some of the exhibits: 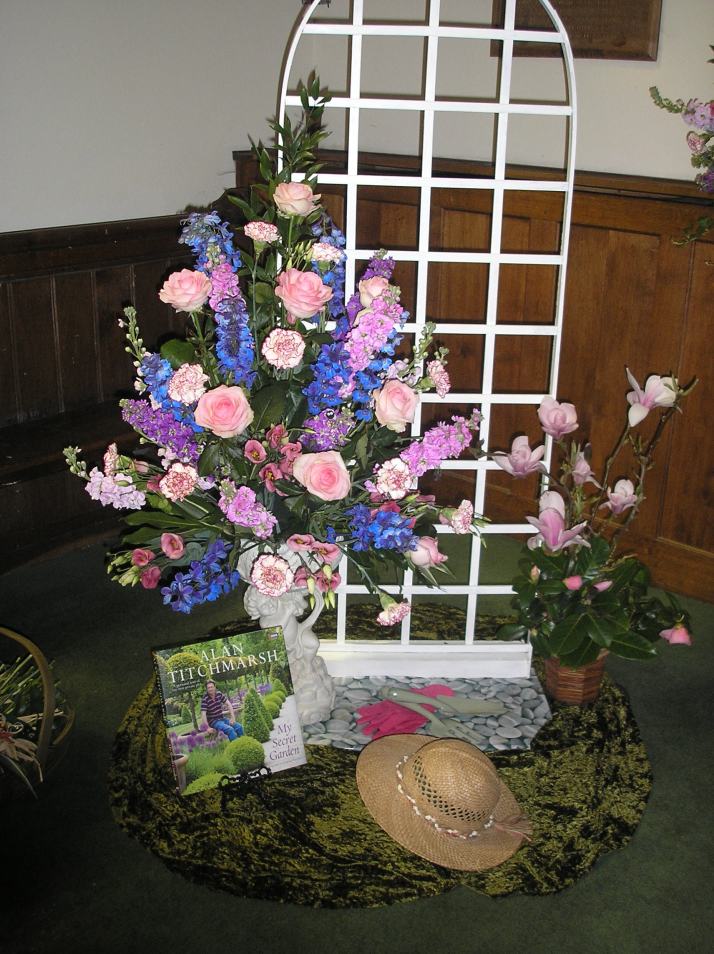 ‘Listen with Mother’ by Maureen Bland: 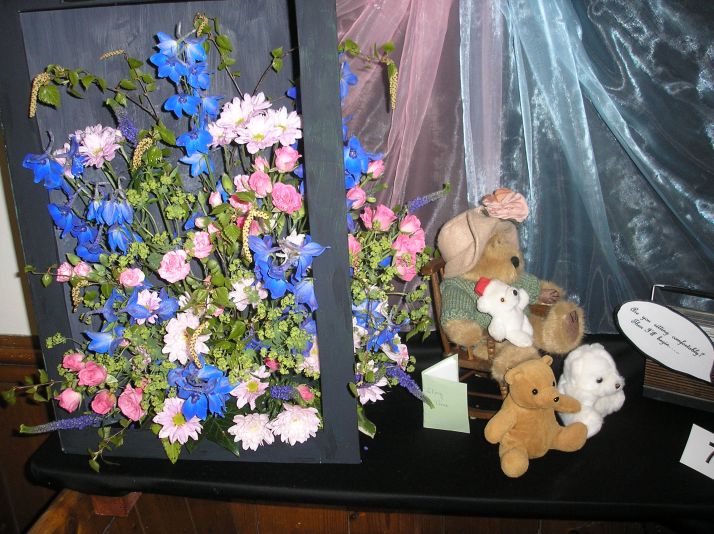 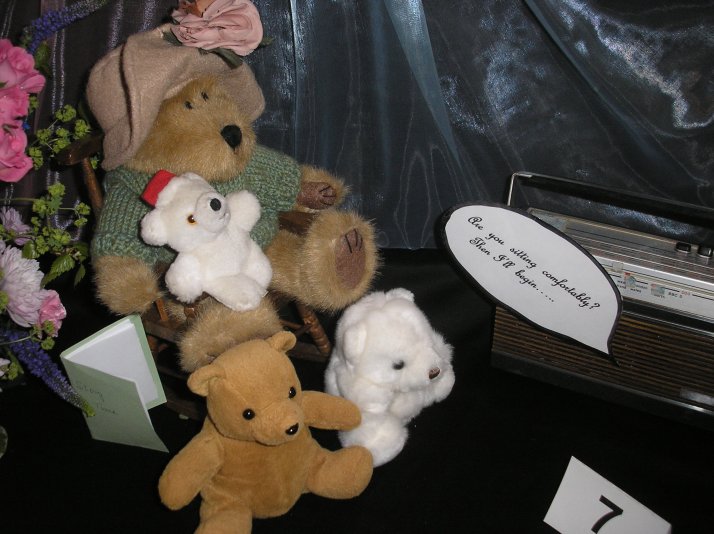 I’ll show you some more of these wonderful flower arrangements next time,

and before I go – a Very Happy Birthday to my son David, who is 33 year’s old today and soon to be a dad for the first time!

and they sell eggs of all kinds…

and when you go in, there are all sorts of things to look at. Let’s look at them together…

Here is the local pub, The Raven.  It’s right opposite Country Matters.

The Lavender Tea Rooms were so busy that we went right home where an orange syrup and walnut cake were waiting for us. 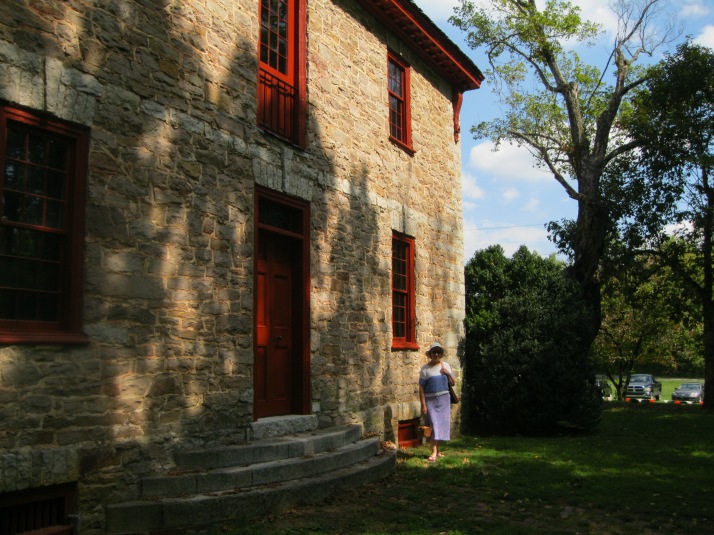 Constructed about 1797 for Francis A. Ramsey, the late-Georgian house has a central passage plan on both floors.  Ramsey’s eldest son, William B.A. Ramsey, inherited the house in 1820 on his father’s death.  In 1840, he sold it to his brother James G.A. Ramsey, who in turn gave it to his son Francis A. Ramsey as a wedding present in 1857.  In 1952 Knoxville Chapter of the Association for the Preservation of Tennessee Antiquities purchased the house from a subsequent owner and began to restore it.  The house was listed on the National Register of Historic Places in 1969.

Last Saturday there was an open day and we went along to look at it. There was a Craft Fare in the grounds and the weather was lovely so we had a great time looking round the house and visiting all the stalls. Unfortunately we were not allowed to take photos inside the house so there are none of those to look at, but if you ever get the chance do visit it yourself.  It’s well worth the trip.

So here I am outside the house. There is a central door with a path leading up to it, but we were told that the original residents didn’t use the path much, preferring to go round the back because the area at the front of the house  is swampy. Opposite the house on the other side of the road was a large, swampy pond. At least one of the original owner’s children died from Malaria which was caused by a mosquito bite. Mosquitos breed in watery places. After the death of his dear child, the owner had the pond drained.  How sad to lose a little girl like that. 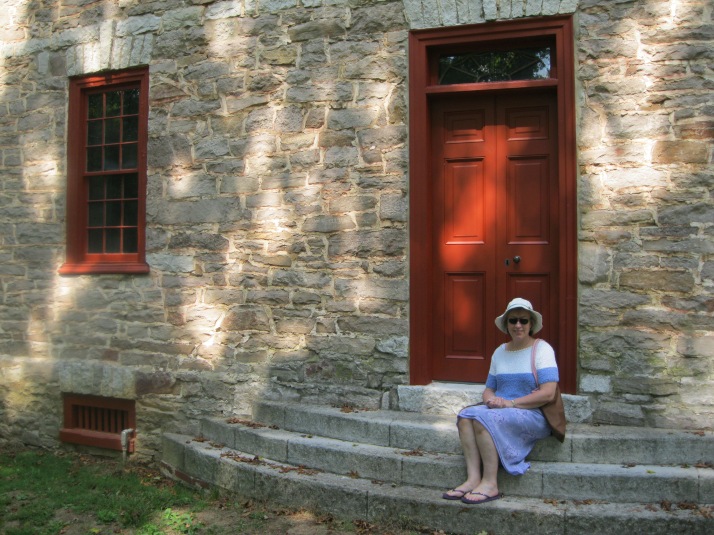 The house has a central door on the first floor, right above the main front door. This was used when furniture needed upstairs. The furniture would be hoisted up and through that door. To the right of the main house is a log cabin. You can see it in the picture. At first I thought this was going to be the kitchen, but later found out that it was the original house where the owner and his family lived whilst the main house was being built.  To build and own a house as large as this one made the owner a rich man because most people would have lived in a log cabin in those days. 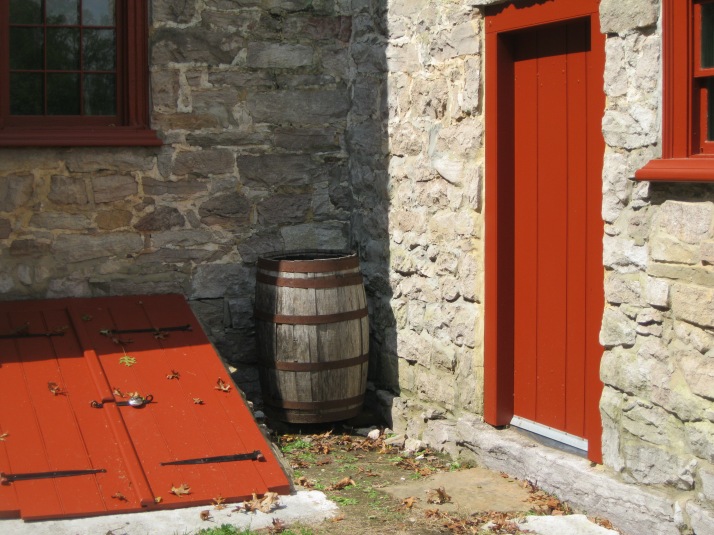 This is a wooden house quilt on the wall. Isn’t it pretty? 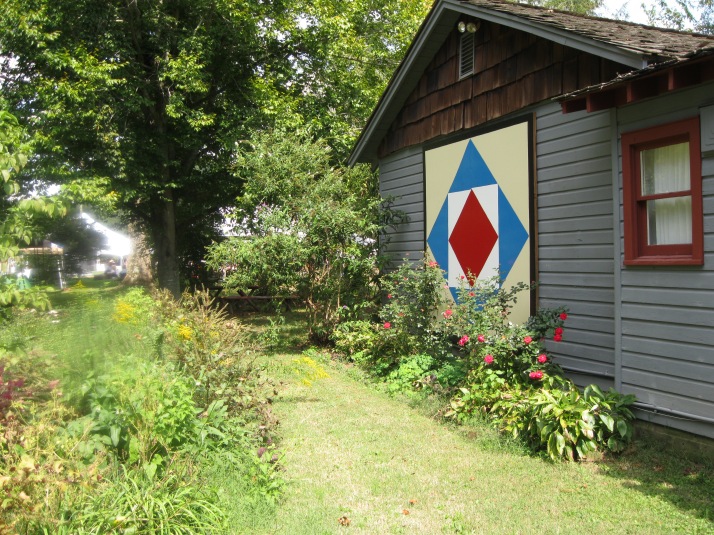 One of the first stalls we came across was a friendly couple who were making and selling popcorn. 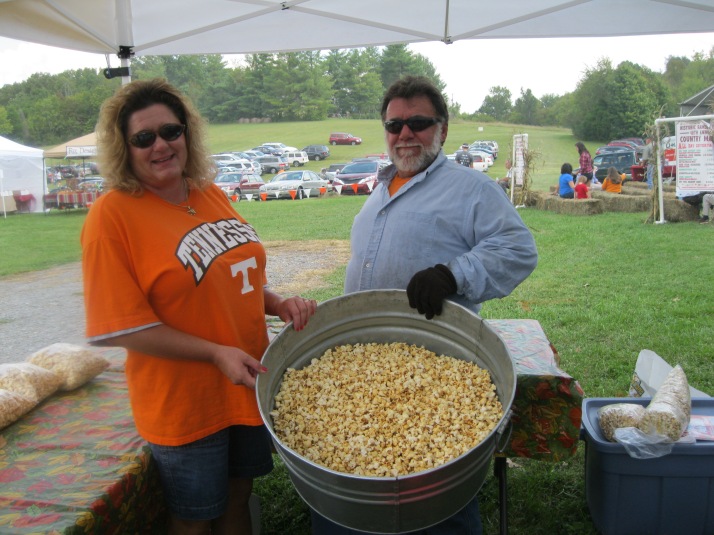 …and soon after a stall selling home-made ice cream. We had to try it!

Then I found this lovely old veteran from the Civil War and asked if I could have my picture taken with him. He obliged and this is the result.

Next picture shows the back of the home-made ice cream stall with all the paraphernalia needed to make the delicious ice cream.

The people at the next stall were cooking something delicious in a Dutch oven. From Wikipedia = A Dutch oven is a thick-walled (usually cast iron) cooking pot with a tight-fitting lid. Dutch ovens have been used as cooking vessels for hundreds of years. They are called casserole dishes in English speaking countries other than the USA (“casserole” means “pot” in French), and cocottes in French,

My little grandson Dylan likes coming to Oma’s house. I have lots of toys for him to play with, most of which I kept from when my own sons were little boys.

He loves the circus train. Here he is playing with the ringmaster, who has a black moustache and a top hat. Dylan likes putting the little people into the suitcase.

Then I noticed that the pattern on my footstool looked like the waves of the sea, so we had lots of fun with his three little boats, making them bob up and down on the waves.

Then I told him that Oma is going on an adventure on a big aeroplane. I suggested that he looked in the sky on Tuesday. If he sees a big aeroplane flying by at about 3 pm, he might see me in the window, waving at him.

I also told him to watch the postman when he comes up the street. He might have a letter from me to him. I showed him what a letter looked like (I had one handy to send to my friend) and that when it came it would have his name on it: MASTER DYLAN S…. 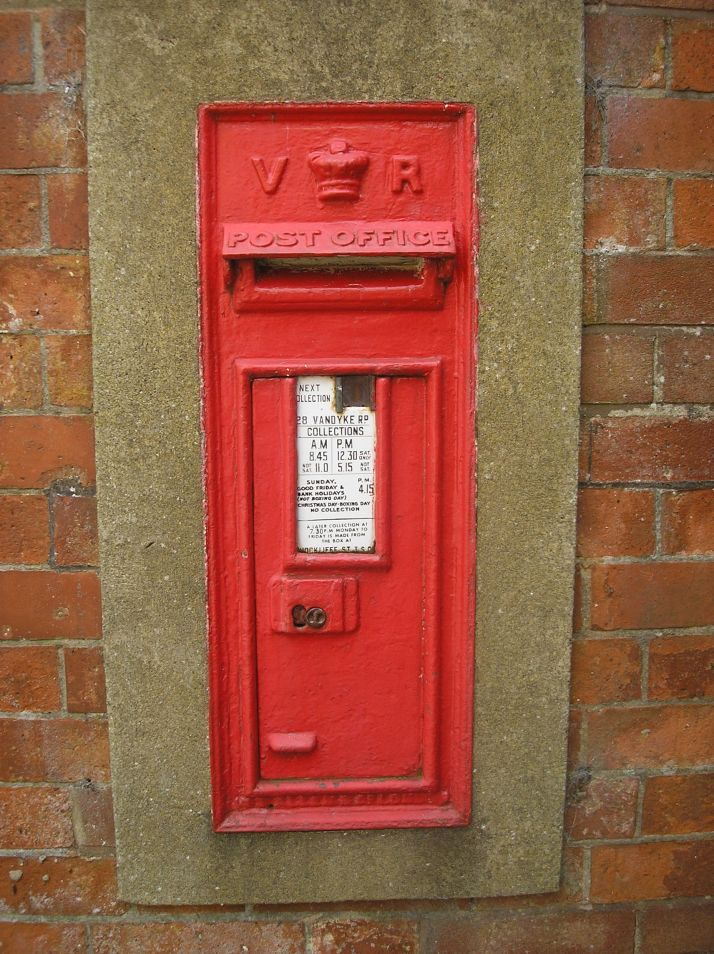 From ‘this is Somerset’

A crowd of 80,000 in the stadium, and an estimated audience of a billion worldwide, saw artistic director Danny Boyle’s Tor creation form a central part of the £27 million show depicting Britain’s ‘Green and Pleasant Land’.

‘The iconic Somerset landmark formed an eye-catching part of the ceremony, and was then used to fly the flag of each of the 204 competing nations when the athletes arrived at the venue.

After getting under way at 9pm last night, the ceremony reached a spectacular finale shortly before 1am this morning with the lighting of the Olympic Cauldron.

The cauldron, formed of 205 copper petals representing the competing nations coming together in London for the Games, was ignited by seven young Torchbearers nominated by a cavalcade of Britain’s past and present Olympic and sporting greats.’

You can read more of this article here: 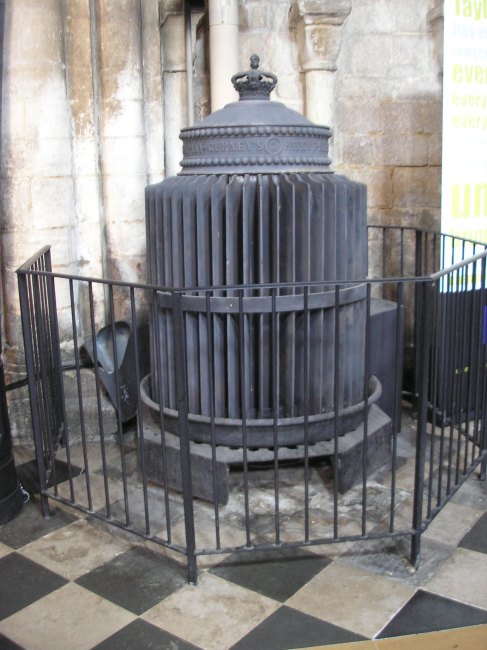 This picture shows a tortoise stove in Ely Cathedral.  Believe me they are welcome in winter when the cold winds from Siberia blow directly towards Ely Cathedral in the heart of the Fens in England.  I lived in Ely for two years back in the 1970’s and almost every day I would walk towards and into the cathedral for a warm-up or a cool down depending on the time of the year.

You can read the history of Ely Cathedral here. It has a truly fascinating history.

One of my ambitions has been to visit all the cathedrals in England. I’m achieving the goal slowly!

I’d l’d like to show you more of the cathedral so I’ve inserted a slideshow (hopefully) so you can see the wonderful octagon which is self-supporting and made entirely of wood.

Do you have any ambitions like this? to visit special places.