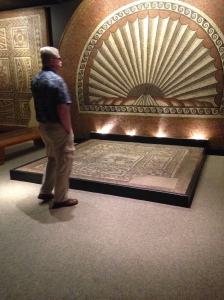 A week or so ago Larry and I went to St. Albans in Hertfordshire to visit the museum of Roman artefacts. St. Albans is a city about 15 miles north of London and 15 miles south of where we live so it made for a nice day out.

I wanted to show Larry the museum because it contains some extremely old and interesting articles. In the picture Larry is admiring one of the mosaic floors, which was unearthed when the old Roman town of Verulamium was excavated. It is almost intact, which is amazing considering its age.

Verulamium was one of the largest towns in Roman Britain and we can learn an awful lot from studying the artefacts which range from the large mosaics you see here to the small objects of everyday life.

Verulamium began in the late Iron Age when it was known as Verlamion. The later settlement of Verulamium expanded to become a very large town and it flourished for four hundred years from around AD50.

If you would like to read more, you can click here. If you want to test your knowledge on Roman Britain, go to the fun section on their website and see how much you really know. The more you delve, the more fascinating it all becomes.

I consider myself very lucky to live in a country with so much history going on all around me.