There were two lovely people called David and Michelle.

It was a beautiful wedding.

They had a lovely cake:

…and all their friends came to help them celebrate:

Then last September, they told us some news…

and we’ve been waiting excitedly ever since.

The Nursery was prepared…

Mum was getting bigger… 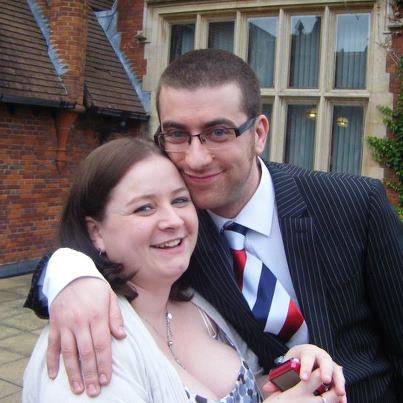 David was providing all the odd foods that Michelle was fancying..

His name is Samuel Alan and he weighs 7 lbs 8 ozs.

He has his mama’s dimple and his daddy’s curly hair!

Well done Michelle.  We’re all so proud of you.

We are all ecstatic!

Just before Christmas, my youngest son David and his wife Michelle moved into a brand new house. It was, of course, very exciting for them and for us as we watched and waited while they house-hunted, chose, bought. They have been living in a rented apartment for seven years while they worked and saved, so to have their own house was a dream come true. It was not easy for them moving in just before Christmas, but the move went relatively to plan and now they are settled and happy.

At the moment they are decorating the nursery, ready for the new arrival in May! Another exciting event to look forward to and another grand-baby for me.

Dylan will have another cousin (he already has two).

Watching the young couple planning their living quarters has made me very clucky and brought back lots of memories. When David was born I already had two little boys, so the first thing I heard the midwife say was ‘Mrs. S., you have a hat trick!’ Although I would have liked a girl, I didn’t mind a bit that the baby was a boy because I could pass down clothes and toys and save a lot of money.

When I got married for the first time, in 1970, we were able to afford to buy a small flat (apartment). It was a struggle and of course I would have preferred a house, but since we were both working, the flat was convenient and easy to clean, cheap to run and ideally situated.  We stayed in it for four years until the first child was born.

These days it is much hard for young couples to get started. Mostly they can’t get on the property ladder until they are at least 30 years old, whereas we were 18 and 22, much younger. Mortgages are very hard to come by. When we were married, it was only the husband’s salary that was considered and 100% mortgages were unheard of. My husband was still studying part-time in the evenings and day release so he didn’t earn very much but somehow we got by.

Did you have an easy start or are you still waiting to get started? Was it easy for you to save up for somewhere to live or have you always rented?