The other day it was so windy I decided to cut the tulips, which were swaying dangerously about. If I hadn’t, they would have been battered for sure. While I was making the rhubarb and apple crumble you see in the pictures, I was watching out of my window and it was as if the tulips were saying ‘save me, save me’ so I did. 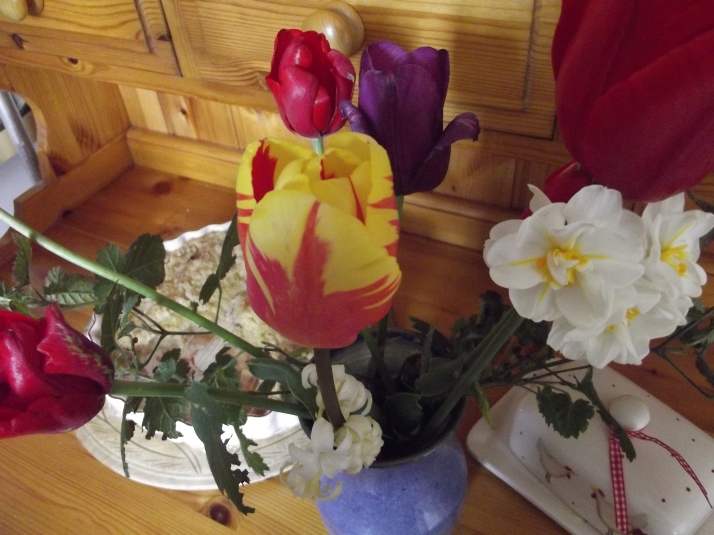 I think they made a lovely show in my country kitchen, don’t you?

The chicken butter dish is new.  Isn’t it just so cute! My last one was Tupperware and had lasted for more than 40 years. Can you believe that! Are you still using Tupperware? If so how old is it?  Can you beat me at 40+ years?

Even so I couldn’t bear to part with my Tupperware butter dish, which had been such a faithful friend all those years. It’s been dropped on the floor numerous times by my three exuberant sons. I can’t see the new one lasting so long.

These parrot tulips fascinate me.

…and through my kitchen door, I can see this pretty bowl of pansies. They have survived right through our harsh winter and are now in full bloom. Just lovely! 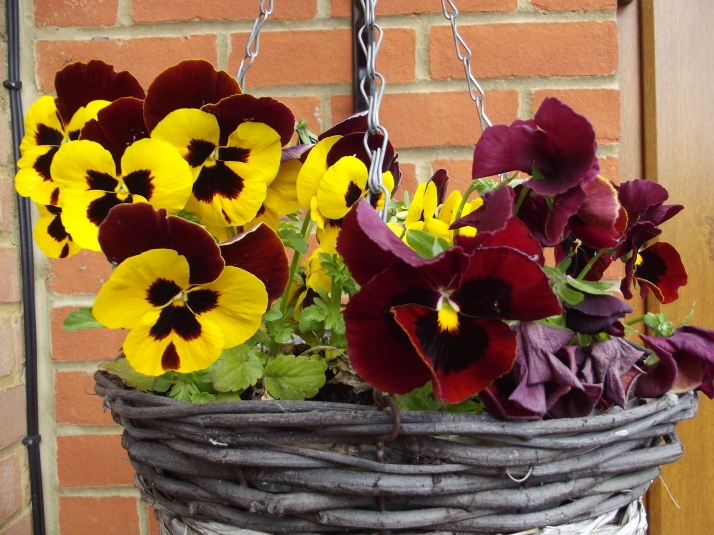 I had to reach up really high to grab this beautiful climbing rose so I could take a picture of him. Holding him steady with one hand and taking a picture with the other is not easy, believe me but I am quite pleased with the result.  He is a little bit ragged round the edges owing to the rain this week, but overall he is surviving nicely and showing off his pretty colours, don’t you agree?

Don’t you just love the contrast in the colours below? The white of the feverfew with the blood red of the Sweet Williams is just gorgeous.

The potatoes are doing ok but the true test will be when I dig them up! I hope they are not rotten in the ground.  We have had the worst summer ever in England this year and that’s not just my opinion! Apparently we are importing a lot of vegetables from abroad now because we have just had too much rain.

The runner beans (on the left) have at last got some flowers – now we need lots of pollinating insects to get them going so they set. In the front are some tomatoes – not many flowers yet!!!

The runner beans look healthy enough and most years it is hard to get enough water to their roots, but this year I don’t think I’ve had to water them at all. I can’t believe we were in a drought situation at the start of April! We even had a hosepipe ban! 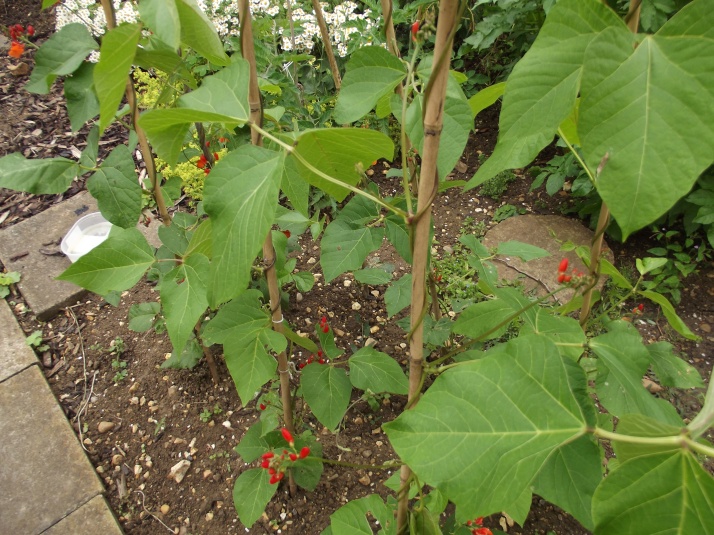 These Sweet Williams are that cerise colour which looks so good in a fashion show.

…and doesn’t the yellow contrast so well with the silvery green of the dogwood?

In the next picture we’ve got purple and white. White lifts every other colour and what would have been a dark corner is now ablaze. Even some liatris has got in with the feverfew.