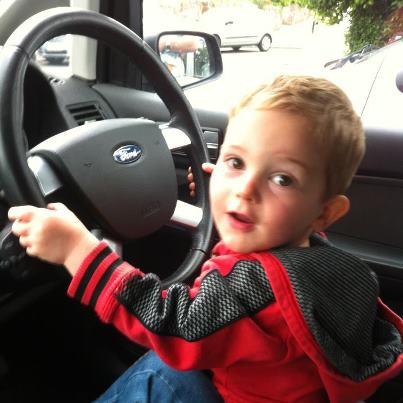 Apparently Dylan likes to drive the car! well, pretend anyway. I miss his sweet little face while I’m over here but I’m glad to know that he’s thriving and growing and getting ever more cute.

He’s nearly two year’s old and it doesn’t seem possible that I have been a grandma for that long. I revel in it, but it is hard work. He’s a busy little fella and it’s hard to keep up with him.

When he comes to my cottage in England he likes to do all the things we usually do, in the right order. Does that mean he’s going to be a good organiser, I wonder? He has his routine and he keeps his grandad and me on track every step of the day.

The last thing we do, while we’re waiting for mummy/daddy to come and fetch him, is to watch Peppa Pig on the dvd.  He LOVES Peppa Pig and he isn’t alone.  Peppa Pig is very very popular in England. Click link to find out why!

Here’s Dylan in a wetsuit.  Why you ask?  I have no idea.  Perhaps he was playing with the hosepipe in the garden. 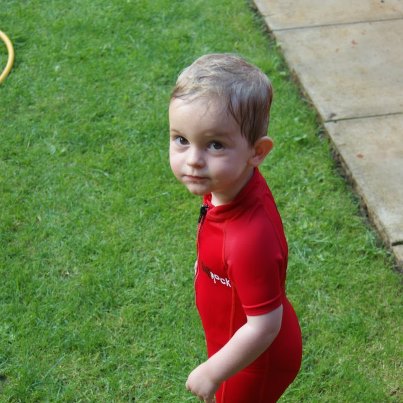 In the next picture I think he’s eating a sweet. He looks a little guilty, doesn’t he!

The other day I spoke to his grandad and he told me a funny story that happened last week while Dylan was with him.  They went shopping to the big supermarket up the road and because they didn’t have many items in the basket, Grandad decided to go to the self service check-out.  He prides himself on being able to use that by himself (Grandad I mean). Next to him was a man who was doing the same thing with his own purchases.  His alarm kept coming up.  It kept saying ‘unidentified item on the shelf’. The man was getting annoyed and very tutchy. He started grumbling.  Grandad had no idea until he turned round that Dylan was putting his lamby on the shelf next door and it was causing havoc with the machine!

I’m still smiling over that story.