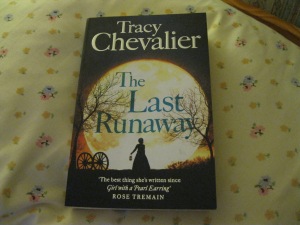 ‘Honor Bright is a sheltered Quaker, who has rarely ventured out of 1850’s Dorset (England) when she impulsively emigrates to America.  Opposed to the slavery that defines and divides the country, she finds her principles tested to the limit when a runaway slave appears at the farm of her new family.  In this tough, unsentimental place, where whisky bottles sit alongside quilts, Honor befriends two spirited women who will teach her how to turn ideas into actions.’

My friend bought this book for me for my birthday, back in October and I loved it. It is the third book by Tracy Chevalier that I have read. The first was ‘The Girl with the Pearl Earring’ and the second was ‘Burning Bright’.

My friend thought I would like the book because it deals with an English girl’s journey to America to begin a new life. She knew that I had that same experience back in 2006 when I left my life in England to go and live in Tennessee. From then until 2013 I was back and forth from England to America, spending approximately six months of the year in each country. Finally, Larry and I decided that England was the best choice for a permanent home given that we are both getting older! The distances are not so great, there is not so much the need for private transport and the health service is better. Those were the three main criteria which influenced our choice plus the fact that I already owned half a house over here.

In the story, Honor’s choice was different, but in many ways she found the same differences over there that I did.

I encourage you to read this book. It is a good read and very enlightening. 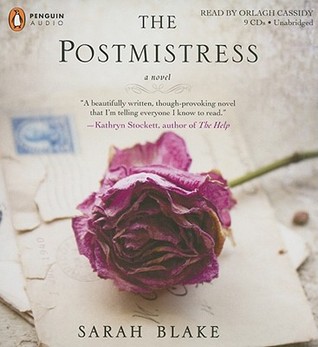 I didn’t warm to this book at first, but as I’ve found in the past, it’s worth persevering sometimes. I had a bit of difficulty with the characters because at the beginning, the author kept jumping from one place to another, one character to another. However, once I’d sorted that out, I realized what she was trying to achieve, i.e. the importance of news reporting during the wartime.

A female American news reporter travels to London and later through Europe and reports back to her American audience as to the full horror of what was going on in Europe during World War II. She carried with her a ‘portable’ talking machine (not actually invented till a few years later)and recorded what people were saying, on trains, in the underground stations etc.

A young American doctor, newly married, hears one of the reports and decides to go to London to share his skills. Before he leaves, he gives a letter to the local postmistress and asks her to give it to his wife, should he not return.

There is a lot of poignancy in this book. In places it is hard to read but overall it is an unusual take on the events which ordinary people get caught up in during the last world war.